Okay, people. I think I am ready to give this a shot. I have two projects to show you, derived from a little pile of random junk in dusty rose.

As explained earlier, I'm supposed to create something fun, show you how I did it, and feel good about recycling/renewing stuff I already have, as opposed to going out and buying MORE STUFF. That's the thought behind 'Stashbust April,' a happy concept sweeping the land. During April, the idea goes, those of us who buy way too many knicknacks and gewgaws - those of us with boxes and boxes of 'someday I'll use it' - have pledged to purchase not one single new thing to feed whichever creative addiction we have.

So from Dollar Store Crafts, I have received a bunch of lovely whatzits, and I am determined to find ten interesting ways to re-purpose them into whozits. The only rule: I may use stuff from this stash, plus stuff I already own; I may not buy, beg, borrow or steal anything else.

Once again, here's the stash: 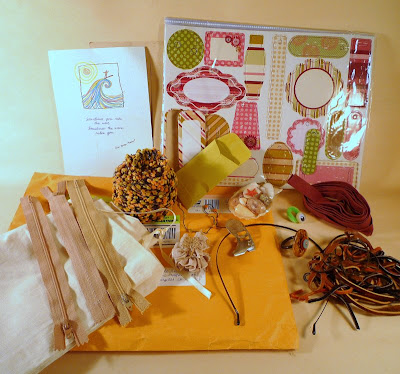 What would you do? Anything jump out at you? For me, it was two simultaneous, completely unrelated ideas. Project one is kind of a quickie, so easy it doesn't need a tutorial. I'll just show the objects I plucked from the pile, the resulting art project - and, if you act now, I will include a valuable bonus in the form of pictures of cute puppies! The second project is going to be my first tutorial ever. Bear with me, I hope I can make it clear. 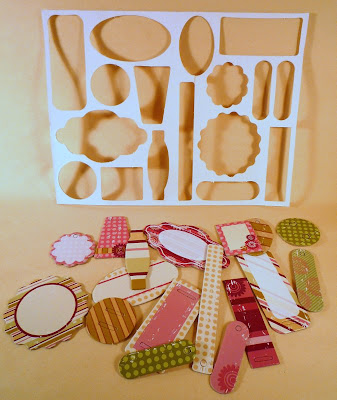 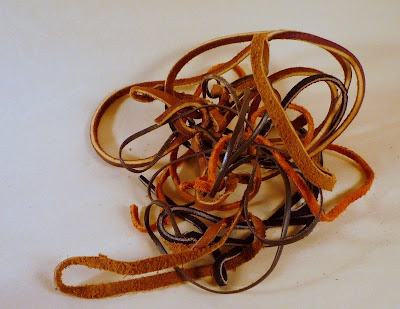 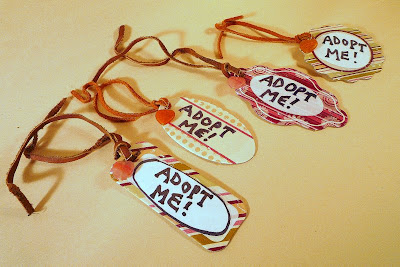 Now, the bonus puppies! I made these tags for a pet adoption event, held by the wonderful animal rescue people at Bark Avenue Foundation. I spent most of yesterday volunteering at the old Farmer's Market here in L.A., where this great organization holds adoptions once a month. By the way, I put a link to their website over there on the left...hint, hint, nudge, nudge. 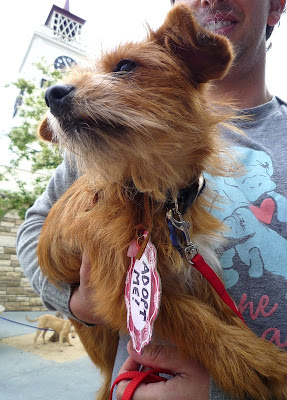 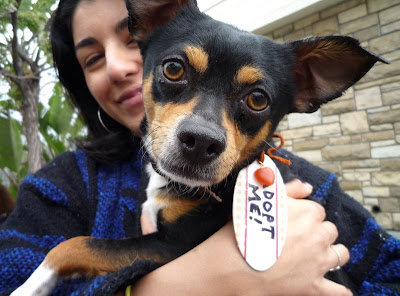 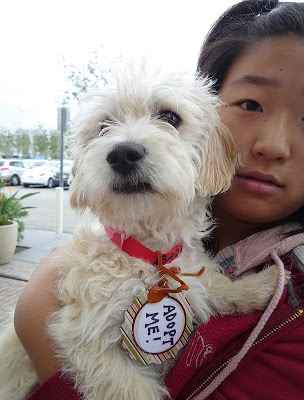 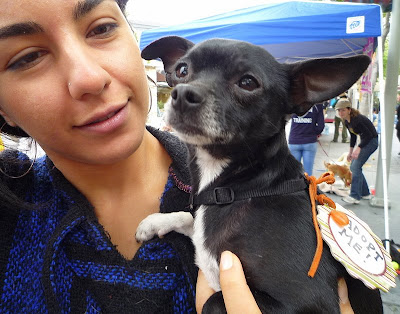 The only little extra trick I did when making these tags: I protected the writing with a layer of clear contact paper, in case of drool. Oh yes, my friends - there was drool.

In the spirit of the Dollar Store Crafts inspiration, I present a rah-ther classy, ridiculously practical necklace you can make for $2 or less. And if you can sew on a button even sort of, you can make this. 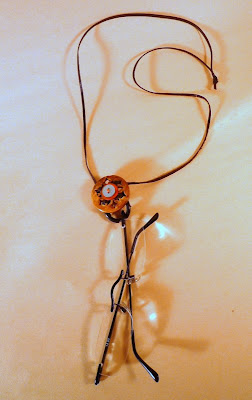 It's a glasses-holder necklace! In the stash, there was this super gorgeous handmade ring: 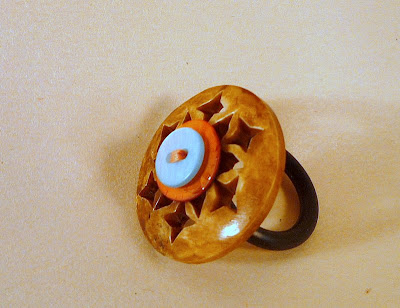 Simple but cool. Three buttons stacked, sewn onto a black rubber O-ring. What a great idea! Way too pretty to take apart. But I wanted to change it into something else...plus, if I posted a tutorial consisting of "Pick up the ring and put it on your finger," would you ever read this blog again? Um...prolly not.

It struck me that if I bent the O-ring down, it would hold glasses nicely. Using another piece of leather from the stash, I tied the O-ring flat, and threaded the cord through the big button... 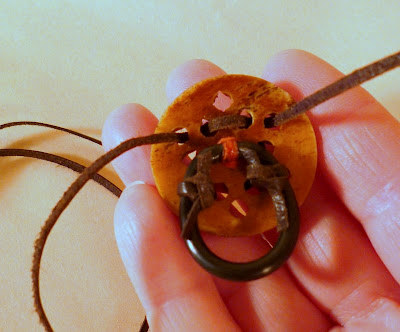 And done! I'm going to use it for my reading glasses. 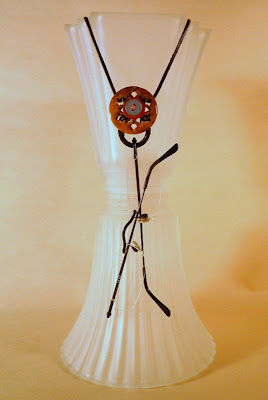 Now for the tutorial - because unless you have a ready-made O-ring-button-ring lying around the house, you need to make this from scratch. This morning, I had the following conversation with my husband:

Me: (rummaging through his toolbox) Ooh! Perfect! Can I have this black rubber O-ring?
Jeff: Which? Oh, sorry, no. I need that one.
Me: But you have, like, four thousand washers. I can't have ONE?
Jeff: No, really, I need it. They're impossible to get, you can't find them anywhere, that's the only size washer that fits inside a...

Well, by that time I had stopped listening, so I really couldn't tell you. But apparently, a black O-ring in that exact diameter and thickness is the Hope Diamond of crummy rubber washers. So I came up with a different - maybe even easier - idea.

Here's what you will need, to make this project. It's a long list - at the end of this tutorial, there will be a pop quiz. Ready?

Three buttons. A length of cord or a shoelace. Needle and thread. 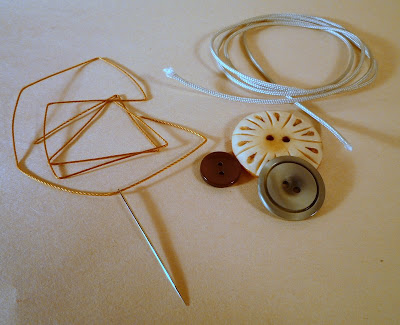 First, fold the cord in half. Pinch it in, a little above the center, leaving a loop big enough to hang down past your largest button. Sew through where you pinched it. Then wrap the thread around the 'pinch' a few times, and tie it off. I used some heavy upholstery thread, but you could use regular thread too: it would be best to double it, and wrap it around enough times to feel sturdy. 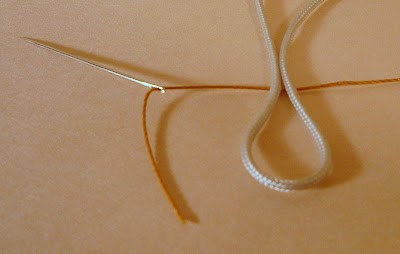 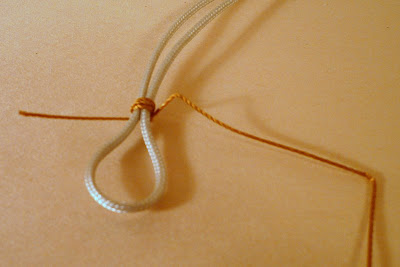 Decide on a pretty combination of buttons. From the back, sew up through all the buttons , then back down through them and around the cord. Go through everything a few more times to secure. 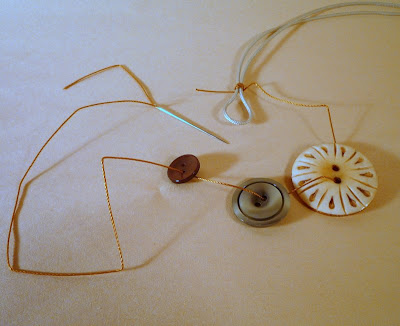 Tie off the thread in back. Tie the cord ends together. It will look like this: 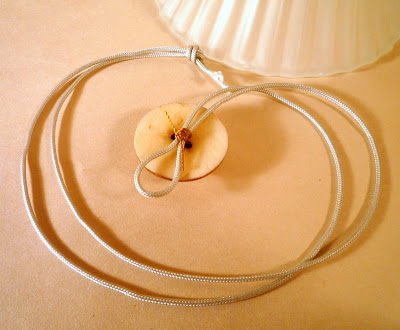 Flip it over, and you're done. 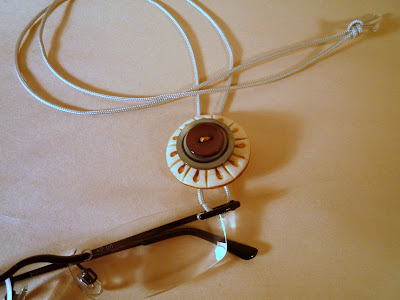 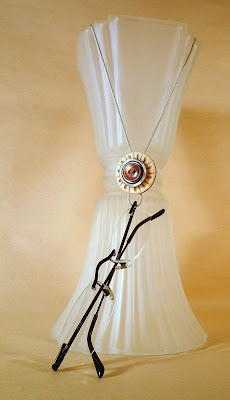 Seriously, it took about 15 minutes. And ten of those minutes were me stacking and re-stacking different buttons indecisively, trying to see what looked cute.

I like this project because it can be adapted to so many looks. I chose a low-key version that would harmonize with most outfits. But I can see making a whole wardrobe of these. You are only limited by the ten million billion buttons in the world. Wild colors? Basic black? Blinged-out eveningwear? Teenagers might like them for toting sunglasses?

Anyway, there you have it. Two projects, and my first tutorial. Yay! Two down, eight to go. 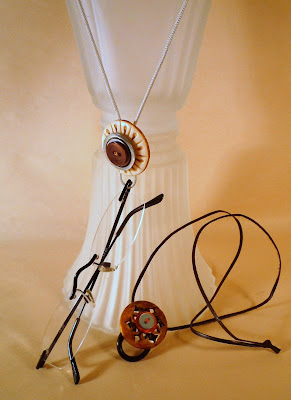