For the past few days, in a thrilling round of Guess The Mystery Thing, my readers have been trying to I.D. the mysterious green wheels in these upcycled necklaces: 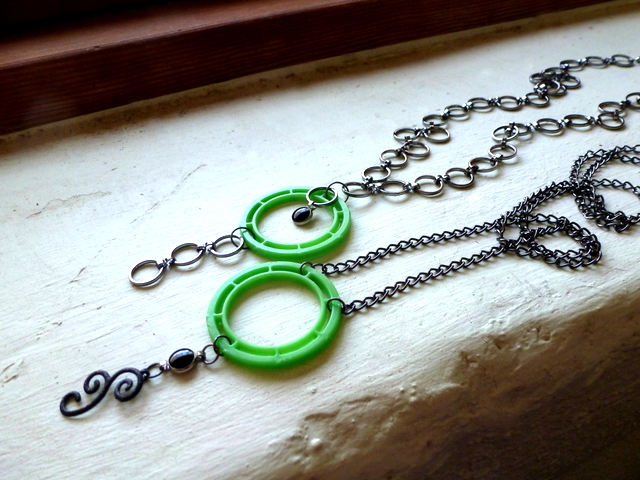 
Betsy: Please tell me they're not new and improved castrating rings.
Sunny:  Godzilla's nose ring.
Mluckw: Did you disembowel a fairy's lime green bicycle? Poor little fairy...it just wanted to help the environment by biking instead of driving to work.
Amy:  Hello Kitty's hula hoops.
Saraccino:  Plants making their own clockworks to strike back.
Day:  Wine barrel hoops from yard gnomes. Those little alcoholics make their own hooch, ya know.
Anne P: A set of wedding rings for giants.
Dena: Frisbee toys for REALLY miniature schnauzers!
June: The missing Olympic ring.
Denise: The rings of Saturn from Barbie's model of the solar system.
Heather: Isn't that part of the hydraulics on a Jin-Ma tractor from China?

Snortle!  Some great ones!  Saraccino, are you saying the plants are going to take revenge on us?  I definitely know a ficus who hates me and is plotting something.

Well, my friends, there was a lot of overconfidence this week.  Lots of people were certain it had to do with beverages.  Nope.  It had nothing at all to do with any sort of beverage, nor any type of comestible.  In fact, I am sorry to tell you that no one even came close this week. 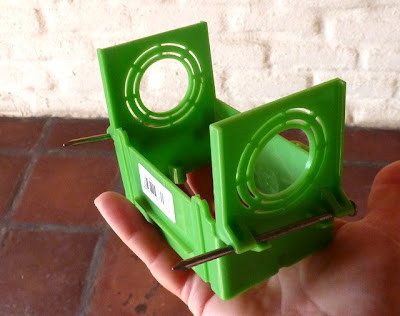 I was walking past the electrical section at a hardware store.  The beautiful lime green color caught my eye, and then the pretty double circles.  I sensed a Mystery Thing and bought it!

To make my junction box into jewelry components, I used an exacto knife to remove the circles... 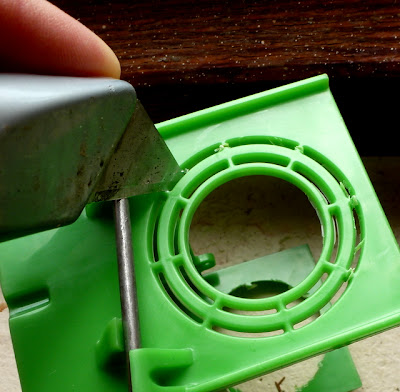 Then scraped them across a metal file to smooth down the rough bits.  (You could add a rub of sandpaper, but I think I did okay with just the file.) 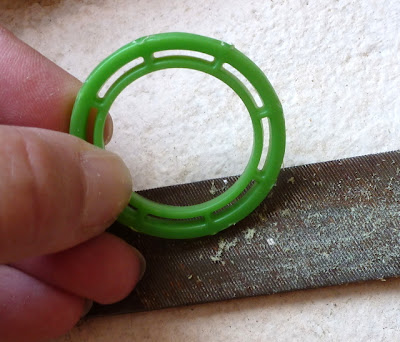 Then came the fun part, designing some jewelry around them.  I went a very simple route, because the circles are delicate and I didn't want to overpower them.  I love the look of these gunmetal chains paired with the bright lime. 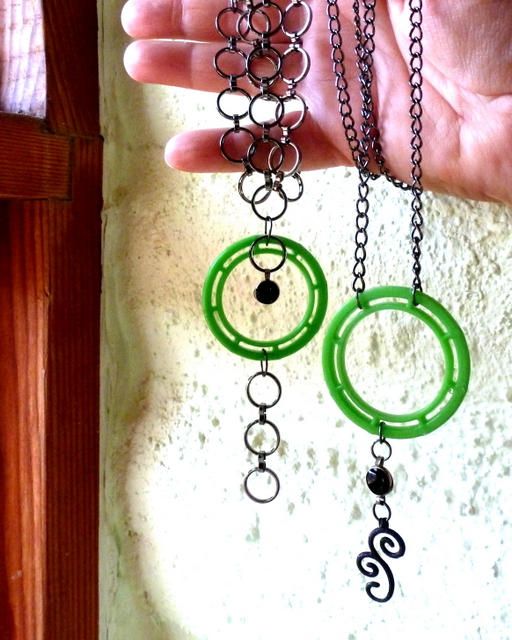 I used gunmetal-finish jump rings to attach the chains; matching jump rings are a nice way to keep continuity. 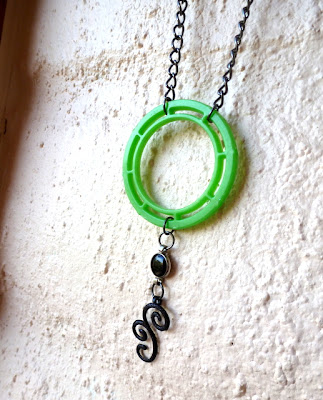 FYI, I'll be doing a post about those dangling charms soon - they are kind of mysterious and cool themselves.

Winners winners!  Since nobody guessed right, I am giving the win to Alex, who was the one person to mention asking her boyfriend's opinion.  Hardware stores are one of my main sources of inspiration, so I applaud her for asking a dude.  And this week's random.org winner:  Joanne!  Congrats, you two - check your email shortly.

Thanks for playing, you guys!  Better luck next time!  (Hee hee - gloating, gloating.)